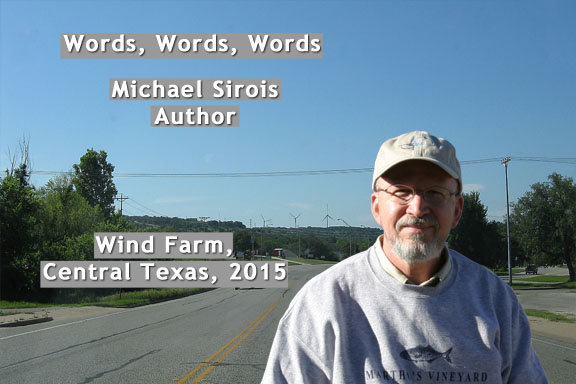 About the image above: In the center you can see a few wind turbines. Texas has over 150 wind farms, and produces more wind power than any other US state. If Texas was a country, it would be the fifth largest wind energy producer in the world. We also do a fair job of generating solar power here in the state. Texas, however, is still oil and gas country, and for years that industry has been spreading disinformation about wind and solar power. You only get one guess why. Now would be a good time, though, to point out that Murder Between Friends, the topic of today’s newsletter, has nothing to do with wind or solar farms, but power (of various kinds) does figure into the plot. I used the picture above just because it is in Central Texas, but is also generic enough that you can’t tell exactly where it’s located. In fact, there’s a road sign behind me that would give you a clue, but I’m blocking your view of it.

Why would I want to do that? Partly because a number of my stories are set in a Central Texas town called Deep Springs, and because the characters in some of my novels (like Sarah Brown in Jagged Man and Rock Jackson in If a Butterfly) have some connection to the town; but also because Deep Springs is based on an actual town in Central Texas, and that place is where some incidents in my non-fiction book, Aggravated, supposedly took place. I’ll cover Aggravated in more detail in a future newsletter, but for the moment let’s just say that I’m attempting to protect the identities of some individuals.

Murder Between Friends is also set in Deep Springs. As the novel opens, Brett Locklin, a Houston newspaper reporter, gets a text message from his sister, saying that their mother has been seriously injured in a car wreck and he had better get back home to Deep Springs right away. What happened to Brett’s mother is revealed in the book, but when Brett arrives in town he hears that Deke Cottrell, someone he went to high school with, has been murdered. He decides to investigate and maybe write an article about the murder. Everyone he talks to appears to be happy that Deke is dead, and a few even hint that the killer is well known, but no one wants to reveal who it is. To complicate matters, Brett’s high school girlfriend is now Deke’s widow, and she seems eager to rekindle her relationship with Brett.

Without giving away any more than that, I’ll just say there are several twists and turns, and Brett soon finds himself in danger. I have the book thoroughly plotted, and about half-written, but (like The Hawthorn’s Sting) there are several details that need to be resolved for the story to work the way I want it to. One of them involves genetic/paternity issues, and there are also a few other medical things I need to be sure of before I can complete the book. So, in order to decide whether I should work on Murder or Hawthorn next, I will need to resolve my issues with one or the other. As with any problems like these, I could discover the answers tomorrow or it could take months.

Having read a little about both stories, which of them sounds most interesting to you? See you in a couple of weeks.

[“I pray that love may never come to me with murderous intent.” Euripides, Hippolytus, 428 BC]

For several years my family lived with my mother’s parents on their farm in Deep Springs. Long after I left for the Houston area, and both of my grandparents had passed away, my mother sold the house and farm and moved to Massachusetts. I stopped by to see it a few years ago, and the house was gone and the land had fallen into disrepair. My grandfather built the fence and gate you see in the picture below. It’s about all that’s left.