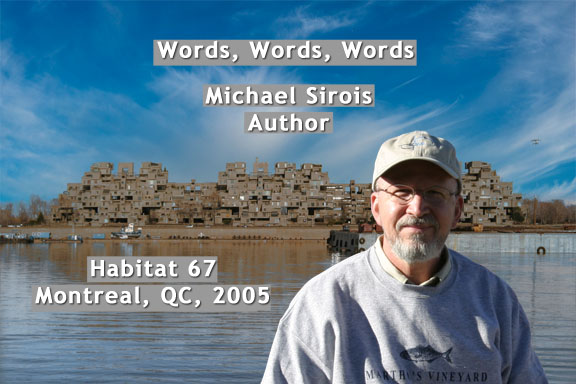 About the image above: It (and another one at the end of the newsletter) were both edited extensively. The same thing has to happen to a novel before it will be ready for publication. The reasons we edit images are often obvious. Compare my original image of Habitat 67 (just below) to the one above. 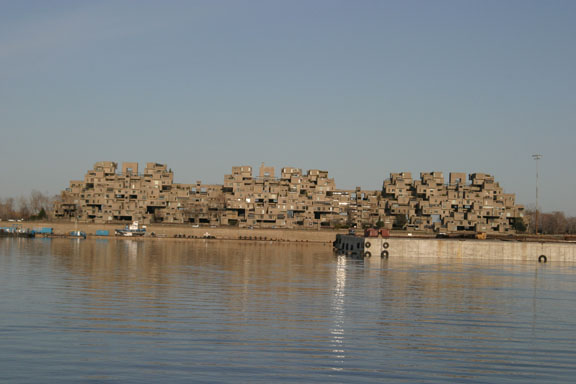 It was a dull early-spring day. I had already walked over a mile to get to the habitat (on a knee that badly needed replacing), and I just wanted a quick shot of the habitat. The sky was dull. The light was dull. The St. Lawrence River had only finished melting the last of its ice a few days before, and the river was barely moving. I didn’t bother with a tripod, so the horizon ended up slanted a little in the image. The shot definitely needed editing. Without going into too much detail, I rotated the image counterclockwise in Photoshop to level the horizon, used the Curves tool to adjust the highlights, midtones and shadows in the image to make it “pop” a little, but that wasn’t enough. The sky and water were still too flat and dull. I saved it and reopened it in On1 Photo Raw, used their Sky module to replace the dull sky with a vibrant one, and then added a hint of the new sky’s reflection to the water.

How does that apply to writing novels? I feel fairly confidant in saying that no novel (or short story or poem or film script) is perfect as soon as it’s written. Any written material needs to be reworked before it’s ready to be published. Also, no two writers in existence have exactly the same method for writing, so I can’t give you a one-size-fits-all secret for writing success. I’m being nit-picky when I say that, of course, because most of us have been influenced by other writers we admire, or courses we have taken, or just by the weight of experience, but the one thing I think is true for all of us is that nothing is perfect the first time around. I also think it’s true that, no matter whether the writer is a plotter (carefully plans every detail of the novel in advance) or a pantser (places their pants in a chair — with themselves inside the pants, of course — and just writes, letting the novel decide where it wants to go), they will eventually have to edit their work, and edit it extensively if they want it to be good. Most writers, of necessity, fall somewhere between pantsing and plotting, but all writing, like the image above, needs to be edited because it is never, ever, ready as soon as the first draft is done. The dull, lifeless, basic descriptions most of us begin with need to be altered, brightened, made more colorful and more interesting. Like the image at the top of the page.

In some future newsletters, I’ll go into some more detail about plotting and pantsing, and give you some concrete examples of how my editing process works. I’ve included another Before and After image below to illustrate one very important tool for writers, removing the unnecessary.

See you in a couple of weeks.

[“The only obligation to which in advance we may hold a novel, without incurring the accusation of being arbitrary, is that it be interesting,” Henry James, The Art of Fiction, 1888.]

Sometimes an image (or a novel) doesn’t work because there are elements in it that interfere with the viewer’s/reader’s ability to become involved in it. In a novel it could be some dialogue that isn’t necessary, or a description that doesn’t advance the story. In the first picture below, there are some items that distract from the main focus of the image, which should be the skateboarder. In Montreal, while I was walking toward the river from my hotel, I ran across a few young guys who were skating along that concrete wall that you see in the lower left corner of the image, leaping into the open air, and doing ollies (flipping the skateboard over) before they landed on the street below. I grabbed seven shots of this skateboarder with the sports shutter on my camera. Only a couple of shots were in the air, and the first image below was the best one. It became the equivalent of the first draft of a story, but it had problems. The biggest problem was that the stop sign blocked us from seeing his right arm. So, I removed the stop sign, replacing it with clones of what would have been behind it, overpass, street, railing, etc. (an arduous process, but do-able), and I also decided to eliminate the building behind the overpass rather than recreate the parts of it which had been hidden.

I was then left with a guy whose arm had been chopped off at the elbow. Fortunately, one of the other images of him in the air showed his entire arm, so I made him whole again with a bit of layer pasting, ending up with what you see in the second image below.

I had been working on the image for a few hours by that point, so I decided to stop there. I could have done lots of other detail work, like adding more focus on the skateboarder by isolating him from the background and blurring the background slightly, especially in the areas of the image that were farther away. That’s what editing a novel is like, adding and subtracting bits and pieces, refining and altering elements (including single words and phrases), until it’s ready. Our work will never be perfect, but we like to get it as close as we can (without killing ourselves in the process).