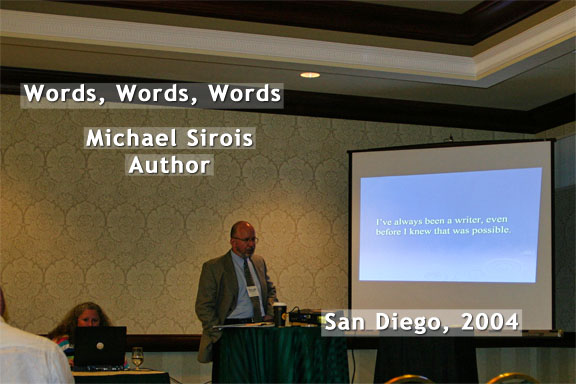 [This is the first of a series of newsletters I’m sending to my mailing list. The date below was the date it was sent out. I’ll archive them here on the blog a week after they are delivered to my subscribers.]

About the image above: In the late 1990’s, while I was still teaching, my school was given a ton of money from a respected philanthropic organization as part of a national educational reform effort. One of the things a group of us did as part of that reform process was to record our teaching experience using narrative portfolios. I won’t go into great detail about that except to say that several of us continued to document our work after the funding ended in the early-2000’s. The image was taken at a conference where we presented our work to other educators, but I used it for this newsletter because of the sentence I displayed on the screen during the presentation.

“I’ve always been a writer, even before I knew that was possible [as a career].”

The first time I recall doing any serious writing (not for school) was during the third grade. I had a crush on a girl, and was trying to get her attention. I rewrote a Classics Illustrated** version of Helen of Troy as a play so I could cast her as Helen and cast myself as Paris. It didn’t work, and the play never happened, but it did set me on a path that resulted in a flurry of poems and short stories; then later, movie scripts and plays, and eventually novels.

I soon discovered that good writing isn’t an easy process. It may, though, be the most satisfactory “job” I’ve ever had. There’s nothing like the satisfaction (and sometimes the fear) of taking something you’ve worked on for a very long time and releasing it into the wild. It does, however, require me to be chained to my desk for long periods of time, with everything that involves. Right now I’m doing final edits for my next book series, If a Butterfly. I’ll spool out some thoughts about what that’s like in upcoming newsletters.

See you in a couple of weeks.