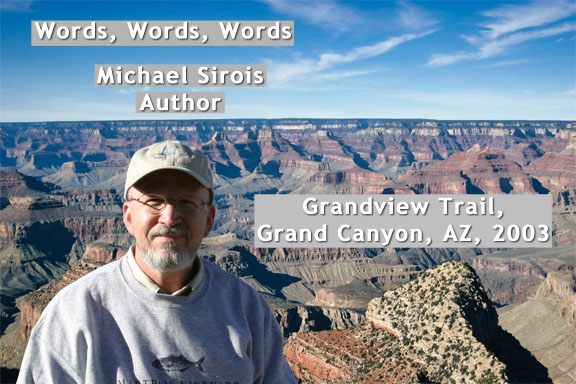 (About the image** above) By the beginning of November 2003 I had already written a scene involving a character named Billie Crowder. The scene was set in a courtroom, but not in any particular time or place.  In the middle of the month I traveled to Arizona to work with the Education Committee for SC2003 (the Supercomputing Conference), held in Phoenix that year. I had a little extra time after the education part of the conference was over, so I took a day trip up to the Grand Canyon, and had a helicopter flight over it as well. I had started writing the first draft of If a Butterfly just a few weeks earlier, but this trip sent me off in a whole new direction. I decided that day to have Billie’s character live in the Phoenix area, and have her go to the Grand Canyon (where I could have all sorts of new and unusual things happen to her).

One of the most important things any writer can do is to remain open to different possibilities. Ideas can arrive from anywhere but if the writer doesn’t act on them they don’t become part of the story. I took a lot of pictures that day, and that night, back in my hotel room, I took notes on what happened that day, and how some of it might be useful in the story. Those notes and the few hundred pictures I took gave me what I needed to be able to accurately (I hope) describe a trip to the south rim of the Grand Canyon and a ride over it in a helicopter. Other details from Billie’s story required a lot more research and interviews with people who were knowledgeable about the dangers in the canyon, but adding the research to the author’s own experience is just one of the many steps involved in creating a book.

** You’ve probably noticed by now that the same sweatshirted image of me appeared in the previous newsletter as well as this one, but in two different locations (Arizona and London). Same me, two different places. My cap in the image came from swag I got for participating in SC2003’s Education Program. The image above was actually created from two different images, one shot of the Grand Canyon alone and a different one of me at the canyon. I carefully removed the background from that picture (the one below) so I could use that image of me on all of the other headers, pictures I took at other locations.

Here’s the original image of me at Grandview Trail, Grand Canyon, AZ, 2003 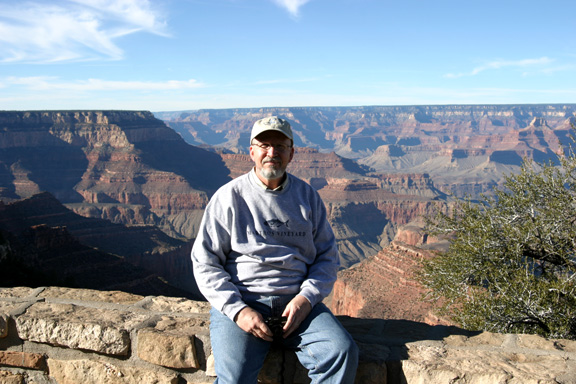