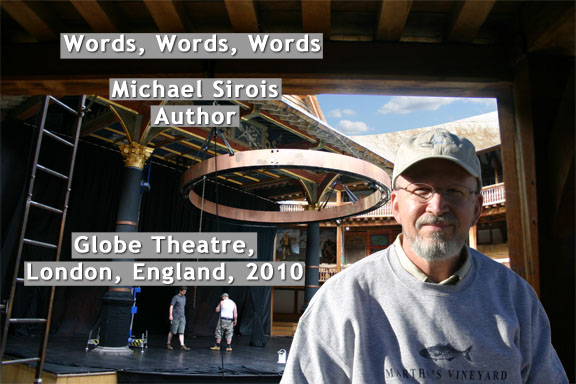 About the image above: The Globe Theatre, on the south side of the Thames, is where many of Shakespeare’s plays were originally performed. This image was taken at the new Shakespeare’s Globe, which was finished in 1997, and is a reconstruction of the original. It’s located about 750 feet from the site of the original. Some listed Georgian townhouses were built on the original site; and, since they were on the National Heritage List they couldn’t be removed.

Actors have to learn a lot of different things during the course of their careers. It goes with the territory. Whatever your character does for a living influences the way you portray them. It’s just as true for writers. Each of our characters are individuals whose actions are guided by their lifestyles and a host of experiences which shape their personas.

My acting training was informal to begin with, a few class plays in elementary school, and many afternoons inventing stories to act out by myself or with friends in our back yards. In high school it became formalized through school plays and classes, but without much serious preparation. During the 10th grade, when I was cast as Professor Bhaer in Little Women, I practiced a German accent (on my own). When I had to play the overbearing Captain Keller in The Miracle Worker during my senior year, I just drew on my experience with stubborn men I had known. It wasn’t until I was in college at a small school, Stockman University, in the Central Texas town, Deep Springs (the college and town are both pseudonyms*), that I actually learned the basics of some skills in order to play certain characters. An example: I was cast as Hamlet in 1969, and there’s an extensive swordfight near the end of the play. The actor playing Laertes and I could have just swung our swords (fencing foils) randomly and bashed away at each other, but that would have been disastrous. Like all fight scenes on stage (fists, knives, swords, or whatever), the action is choreographed. The trick is to make it look like each move isn’t planned in advance, and that means lots of practice and some knowledge of how a swordfight would happen in real life.

My most extensive swordfight training happened in the mid 1970’s. I had moved from Deep Springs to Houston, and was finishing my degree at the University of Houston, majoring in Drama and English. Fencing was a required course for acting majors. It was taught by a master mime and fencer, Claude Caux, and was an excellent grounding for the actors who wanted to broaden their skills. A few years after the class I was cast in a play called Zastrozzi, The Master of Discipline. There was a great deal of fencing in the play, and we worked extensively with a fight coordinator. My earlier time in M. Caux’ class helped me get up to speed more quickly for the fight rehearsals for Zastrozzi. In writing, acting, or in life, each previous bit of acquired knowledge helps prepare you for the next thing you need to learn.

A little side story: I’m left-handed, but I do a number of things with my right hand, and some with both, but I fence with my left hand. Cindy Pickett (Ferris Bueller’s film mom) is also left-handed. M. Caux paired us together for the semester, saying something like, “Left-handed fencers always screw the right-handers up.” He wanted everyone to learn the basics without the distraction of their partners making their feints and parries from a totally different position than they were expecting.

Writers can fake some things, but they really shouldn’t. Wherever possible they should know that their character’s actions are completely accurate (unless, of course, their character is a bumbler who isn’t supposed to know what they’re doing).

The next newsletter will be about editing. See you then.

[“The pen is mightier than the sword,” Edward Bulwer-Lytton, Richelieu, Act 2, scene 1.]

* For an explanation of why I created the pseudonym Deep Springs, read this: