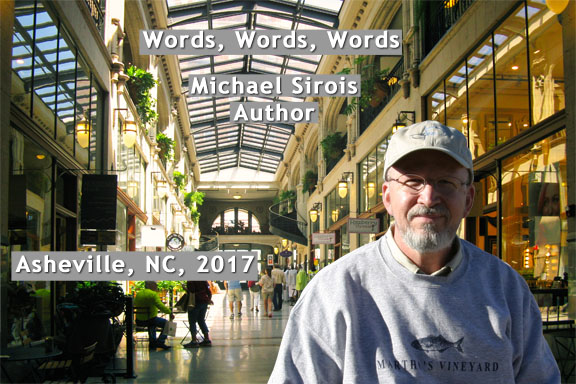 (About the image above) This was taken inside the Grove Arcade in Asheville, North Carolina. It was the first indoor shopping mall built in the city, in 1929. It has been thoroughly remodeled and modernized. Minay and I were in the city to visit my friend, Jerry Stubblefield and his wife, Cindy.

Jerry had invited me to give a talk to a small group of local writers and artists about whatever I was writing at the time. I was deep in the middle of working on a book about my brother, Steve, called Aggravated: The True Story of How a Series of Lies Sent an Innocent Man to Prison. For obvious reasons I usually refer to it as simply Aggravated. It was published in December 2020, but in 2017, I was still conducting interviews and gathering evidence, so I decided to talk about the process of researching the background material needed to make the book as accurate as possible.

Whether an author is writing non-fiction or fiction, I believe that research is one of the most important (but also one of the most dangerous) steps you can take before writing your book. It’s important, obviously, because nothing turns a reader off quicker than an author saying something that the reader knows isn’t true, or is inaccurate. This is especially true if the book is set in a real time and place. If I write that there was an Army surplus store on a certain street in Baltimore in 2005 (as I did in Jagged Man), and there isn’t one there, Baltimoreans are going to call me on it. More importantly, they will lose faith in anything else I say in the book. So research is important if a writer wants to retain the trust of his or her readers.

Research can also be addictive, though. Writers, especially if they are writing their own books as opposed to writing something on assignment, are usually writing about subjects they are interested in. Research rabbit holes are around every corner. It’s very easy to end up spending more time doing research than you do writing the book.

The talk in Asheville dealt with the process I used while gathering evidence for the book about my brother. I videotaped the talk, intercut with the Powerpoint slides I showed the audience. Here’s a link to a post about the talk and links to the video if you would like to see it.

Have you ever had to research something you weren’t particularly interested in, but found it interesting once you knew more about it? Let me know what happened.

[“Research is the process of going up alleys to see if they are blind.” Marston Bates, The Nature of Natural History, 1950.]

Minay and I originally intended to turn the trip to Asheville into a mini-vacation. We were used to taking month-long vacations while I was still working (because I had the summers off while I was teaching) but we hadn’t been on an extended trip like that since 2010. At first we planned to drive straight to Asheville, do the talk, and then spend a few days at Williamsburg, Virginia, before working our way back across the South and back to Texas. Before we left, though, Minay heard about three quilt exhibits at the National Quilt Museum in Paducah, Kentucky. She’s a quilter, and quilt stuff overruled historical stuff, so we changed our plans.

This is the route we took, stopping at William Faulkner’s home in Oxford, Mississippi, then to Paducah, then a Kentucky bourbon distillery and a coal mining museum before we got to North Carolina. It added nearly 500 extra miles to the journey, but I gathered a lot of information (a writer’s most important tool) about different professions, so it was worth it.