About the image: (Above the Desk) I’m wearing a t-shirt, my usual uniform for about ten months of the year (a minimal spring followed by an exceptionally long summer). All the other two months hold is an almost non-existent winter (during which I switch to a long-sleeved t-shirt). One of the good things about being a writer is you don’t have to dress up to go to work (in fact, you don’t have to get dressed at all unless you have an appearance somewhere), but that’s not what this newsletter is about. It’s about the way different novelists approach their writing.

Many people say they want to be writers but never write, and many others dabble at writing but never finish. There’s nothing wrong with that, but to be a writer you have to write. To be an author you have to finish (and then publish). The people who are serious about it and work toward becoming published usually fall somewhere between two extremes, Plotters (sometimes called Planners) and Pantsers (who hardly plan at all).

The most extreme versions of plotters want to complete their work without being surprised by anything. They spend a great deal of time constructing what they plan to write before they write a single word of their first draft. When they are done planning they have a roadmap for every scene, know every character’s motivations, have a clear idea of what the characters will say and do in any given moment, and know exactly where and how the story will end. I imagine they also provide themselves with an impeccable outline (including an overview and a scene by scene plot summary, complete with headings, subheadings, and points and subpoints). That works great for academic papers, and probably helps the plotter/planner finish accurately, but sometimes it doesn’t give the story much room to breathe, which can make it seem flat or stilted.

The complete opposite of that approach would be the absolute pantsers. The name is derived from the phrase “flying by the seat of their pants (whether they are wearing them or not). A true pantser sits down to write with zero preparation. They might have a vague idea of the genre and characters (like a gothic murder mystery, or a space alien culinary school zombie romance, or whatever), but not much more than that. Since they begin with very little idea where the story is headed, they let the plot shape itself on the fly. The problem with that approach is that the story could (and almost always does) veer off in wild directions, and they could end up with a muddled mess.

Most writers, of course, fall somewhere between those two extremes.

Once I begin actually writing, I’m mostly a pantser, but before that I do spend time deciding whether my idea will be worth writing about, and doing at least some basic research. I rarely outline, but I do make tons of notes before and during the writing. I like to have a sense of how my story is going to start (knowing that my original opening rarely ends up being the final one); and I also like to have a general idea of how the story is going to end (even though that also can change once the characters start telling me “No, no, no. I want to do something else instead.” That happens more often than most writers would probably admit, but having at least a general sense of the ending gives me something to aim for, and that helps me keep the plot more or less on track.

In another newsletter I’ll visit the turns a plot can take when I let it unfold on its own. The next one, though, is going to take a look at the isolation writers can experience, and how some of us deal with it.

[“It is a bad plan that admits of no modification” Maxim 469, Pubilius Syrus, 1st Century B.C.] 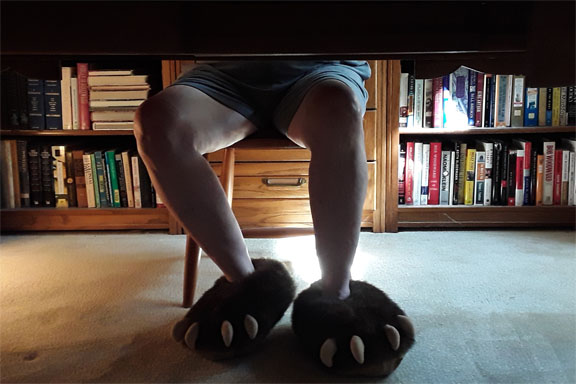 (Below the Desk) The rest of my outfit. Exercise shorts (replaced by sweatpants or jammie bottoms in the winter), and my bare feet (or sometimes, bear feet).