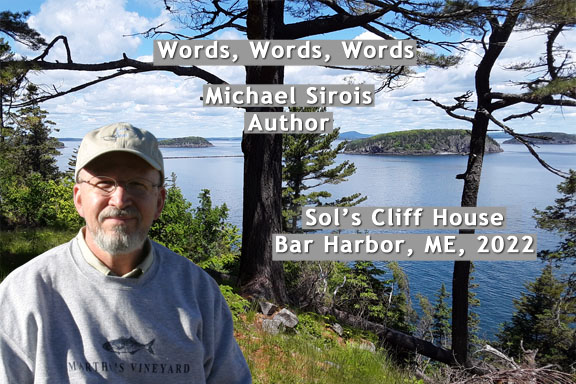 About the image above: The prominent island to the right of the tree in the center is Bald Porcupine Island, off the coast of Bar Harbor, Maine. A little farther in the distance are some other islands with spiny names (Sheep Porcupine, Burnt Porcupine, and Long Porcupine Islands). You might also be able to see Bar Island barely peeking out from behind some shrubbery just to the left of my cap. No, don’t worry, I’m not going to do the “Knights Who Say Ni” sketch, even though I did mention the dreaded word, “shrubbery.” Jane Jarvis, a character in If a Butterfly, would have definitely launched into it with no warning, though.

Since June of 2020, I’ve been a member of The Gutsy Great Novelists, an online writer’s community run by author Joan Dempsey, and it has been a wonderful experience. During the pandemic, members of the group met regularly, both through Zoom and in online forums, gave each other pep talks when needed, and compared experiences in our quests to become successful writers. I came to know and respect many of the other authors I met there. So, when Joan announced she was going to have a week-long writer’s retreat at Sol’s Cliff House, in Bar Harbor, I jumped at the chance (after okaying the cost with my wife, Minay, of course).

Sol’s Cliff House is actually a 1914 mansion, nestled in the middle of piney woods on the edge of Acadia National Park, but still only a couple of miles away from Bar Harbor. A perfect example of being secluded, but also within reach of civilization. This retreat was, in some respects, like the other retreats I’ve talked about (in newsletters 19 and 20), but there were differences.

The Galveston retreat was a small rotating group of between six and eight people staying in one house. It lasted a week but the hosts were the only ones who stayed more than a few days. When one of us left we surrendered our room to one of the newcomers. Our working process at that retreat was freeform, decided personally. We each brought food with us to share, and cooked and ate our meals communally.

The Writers’ League of Texas retreats, in Alpine and Austin, were for eighty to a hundred people (around twenty people in each of four or five workshops). Each of those had regular structured schedules. We stayed in area hotels or in the college dorms (in Alpine), and ate all of our meals out.

The Gutsy Great Novelist Retreat was capped at a dozen writers, lasted a week, and we all lived in the cliff house. The retreat was partially-structured. We met together every day at pre-arranged times, but usually only briefly (less than an hour), and then went off on our own to work on whatever we were trying to accomplish. We also met privately with Joan, though, to brainstorm and discuss our novels. And, on a couple of occasions, read brief passages from our work to the rest of the group for feedback. We only ate in town once. Edith, Joan’s assistant for the retreat, prepared breakfast for us every morning, and Chef Paulette Bilsky-Phillips created wonderful, truly amazing dinners for us. Removing everyday chores from the equation allowed us to focus completely on our writing.

During the course of the week I gained some insight about possible solutions for completing The Lives of Franklin Roosevelt Jones, the book series I talked about in Newsletter 15. With Joan’s help, I discovered some different ways to approach the overall story. Since I’ve returned to the daily grind, though, I’m beginning to have second (and third and fourth) thoughts about tackling the series because it will be such a massive and complex undertaking. There are at least two other books in line ahead of it (Jagged Man and Murder Between Friends, and possibly The Hawthorn’s Sting), so I’ll have plenty of time to decide whether Franklin stays third or fourth in line or gets pushed further along the queue in favor of something else. At any rate, the retreat was definitely worth it, and I would highly recommend it to anyone who is interested in improving their writing.

In the next newsletter I plan to give you a peek behind the curtain to see what a day inside my head is like. See you then.

[“…just because Hanna dressed up her accusations with lots of little details doesn’t mean they are true. You can dress a porcupine up in diamonds, Jimmy Choos, a Dior gown, and makeup, but it’s still going to be dangerous to touch.”
Michael Sirois, from Aggravated: The True Story of How a Series of Lies Sent an Innocent Man to Prison.] 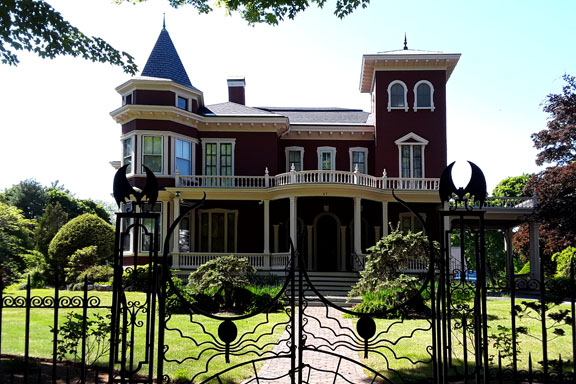 I paused here at Stephen King’s house, on the drive from the Bangor airport to the retreat, to pay homage to the master (from outside the gates, of course).

2 thoughts on “Porcupines Off the Coast…”