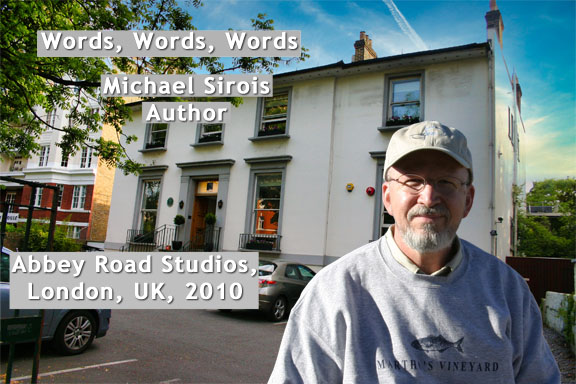 (About the image above) I love music, and growing up in the 1960’s the Beatles were a favorite of mine (they still are). When my wife and I went on a vacation to the UK in 2010, I naturally had to go to Abbey Road, walk the crosswalk (or zebra crossing), and read the messages on the gateposts and the low wall outside. It made up for not being able to see Penny Lane in Liverpool.

Music does feature in my books a lot, but when I was first starting out I made a number of rookie mistakes. I had seen a lot of veteran writers (like Stephen King) insert lyrics into their books in various ways, so I assumed it was fine for me to do that too. I was aware that I would need to get permission to quote lyrics, but I had no idea that how difficult that could be.

I started by just inserting the lyrics where I thought they made sense, whether that was in the mouth of a character singing a favorite song or used as a quote to introduce a book or a chapter. As an example, I had the astronaut in Book One of If a Butterfly listening to music on her iPod while she was exercising on the International Space Station. She was listening to Aimee Mann’s Lost in Space album, and was singing some of the lyrics that expressed her feelings at that moment. I also did similar things with a few other characters. Once the first draft was finished, I started trying to find email addresses for all of the artists.

More often than not I was able to reach either the artists’ agents, or a representative for their record companies, but not the artist. All but one of them said there would be a charge to use lyrics from any of the songs, but they wanted to know a great deal of information before any of them could even quote a price (like the exact lyrics and how they were used in the book, when it would be published, who was publishing it, the publisher, the price of the book, whether it was a paperback or hardcover, and how many copies would be printed, plus a synopsis of the entire book along with some other information). At first, I was only planning to publish an ebook of Butterfly, and didn’t have an agent or a publishing deal then, so I had no way of knowing the answers to half of those questions. As I worked on my second draft, I rewrote those sections, mentioning some of the artists’ names or the names of some songs, but trimmed back on the specifics and eliminated all of the lyrics. The book is probably better for the changes. It became more about the feelings of the characters and less about the music itself.

I did have some good luck with one artist, though. Chris Thomas King, a great blues musician has a song I love called “Baptized in Dirty Water.” I wanted to use the first two lines of it on the frontispiece of my first published novel, The Jagged Man, because part of the book is set in New Orleans during Hurricane Katrina. The lines are:

I did find an email for him, so I wrote and asked if I could use the line. I got an answer from his manager, who moderated incoming messages for him. She told me that she had talked to Chris and he said to go ahead and use it. I was thrilled. It would be great if most artists were that nice about it. I understand that they want to guard intellectual property, but it would be cool all the same if it were easier. The lesson, though, is to always ask. You never know what might happen.

What’s your opinion about books using lyrics from songs? I’d like to know how you feel about it.

[“Musick has charms to sooth a savage breast, to soften rocks or bend a knotted oak.” William Congreve, from his play The Mourning Bride, 1697.]

With the aid of a lot of Photoshopping and a fast sports shutter on the camera, a beardless Michael does a reverse-recreation of the Abbey Road album cover. Picture(s) taken by my wife, Minay. 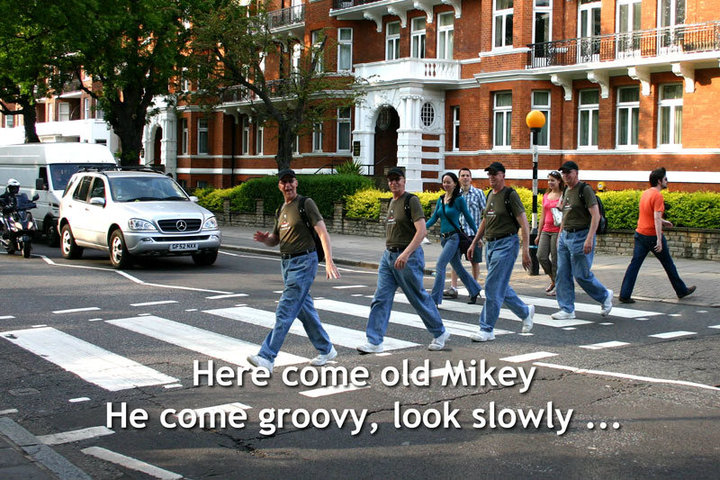