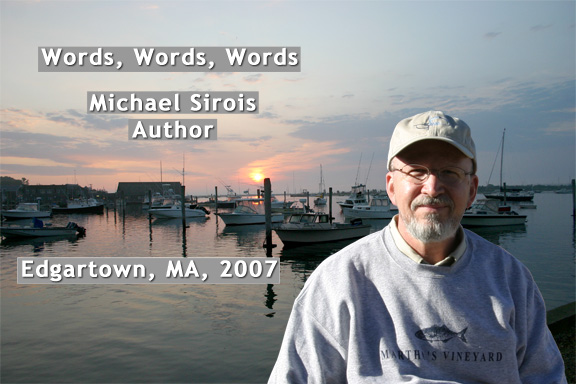 About the image above: Edgartown is located on the northeastern shore of Martha’s Vineyard. If you were driving toward Edgartown from somewhere else on the island, the locals would say you were going down-island. A quick, unscientific glance on Google Earth indicated that Edgartown is roughly 14 feet above sea level. Hang on to that measurement for a while.

This newsletter is about my thriller, Jagged Man, which stands a decent chance of being re-published in the next couple of months. It was the first novel I published (back in 2015). I pulled it off the market about a year ago because I wanted to re-edit it, give it a new cover, and actually publicize it this time. I was a bit naïve about marketing back then. I assumed because it was a good story that it would build an audience. I’ve learned a lot since then, things that should have been obvious at the time. Namely that no matter how good a story is, it won’t reach readers if they don’t find out about it.

Jagged Man takes place in several locations, New Orleans, Houston (primarily on the campus of Rice University), Baltimore, and on Martha’s Vineyard. I won’t go into great detail about the plot except to affirm that the title character is, as Billie Eilish says, “a bad guy.” He’s definitely the antagonist in the story. His birth name was Otha, but he has used many other names since then. There is one other important thing that defines him. He’s over 8,000 years old. Okay, I know what you’re thinking, but — no — he’s not a vampire or a supernatural being. He’s just someone who doesn’t age at a rate that’s noticeable to other human beings. And that’s his problem. People don’t react well to his condition, so he’s always in danger of being discovered.  Here’s a version of a possible blurb for the back of the book.

What if you aged so slowly that snails crawling would break world speed records in comparison? Would that be a good thing? What if your first major life experience was someone trying to kill you because they visibly aged and you didn’t seem to at all? How would that make you feel?

What if Otha moved to your city? Worked where you worked? Learned that you had access to a document that could expose your secret to the world? What would he do?

Sarah and John are about to find out.

As its publication date gets closer I’ll be letting you know more about Otha and how he’s dealt with his condition over the past 80 centuries. Stay tuned.

The next newsletter will be about The Hawthorn’s Sting, a mystery-thriller. The one after that will be about another thriller called Murder Between Friends. I have a lot more work to do on both of them before they will be ready.

The other end of the island from Edgartown is known as “up island.” Lots of tourists go there to see the clay cliffs in the picture below. A climactic scene in Jagged Man is set there at the top of the cliffs, at the westernmost edge of the island. Google Earth indicates those cliffs are roughly 118 feet above sea level (compared to Edgartown’s 14 feet). So, does the difference in their elevations have anything to do with whether a town is up-island or down-island? No, not at all. I’m sure you could find the answer with a bit of Googling if you want to, or you could just read Jagged Man when it comes out in a few months. An explanation is in the book. 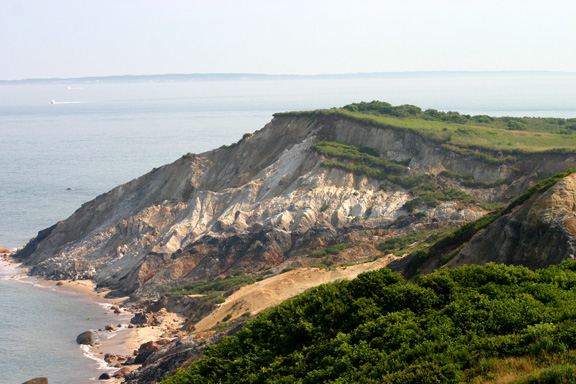